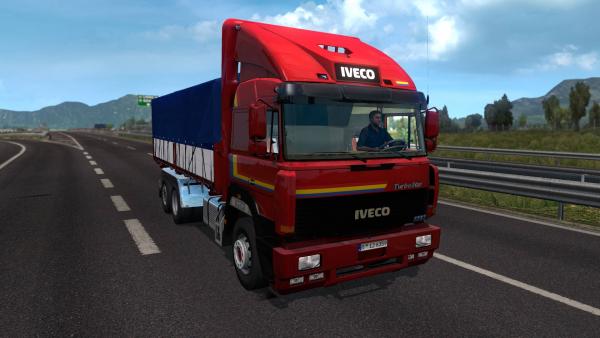 In 1984, the obsolete Iveco 190 truck was replaced by a completely new Iveco TurboStar truck, which differed from its predecessor in a more modern design, increased safety and comfort, as well as innovative technical stuffing. Truck production continued until 1993.

The Iveco TurboStar truck mod for Euro Truck Simulator 2 is presented in two of its modifications, a truck tractor and a BDF version. The authors have implemented two types of chassis with wheel configurations 4x2 and 6x2 with a lifting axle. On the technical side, there are five engines with a capacity from 333 to 476 horsepower with a set of their own sounds, and six gearboxes for 12+1 and 16 speeds. The authentic interior in two colors, with full animation, is supported by SiSL's Mega Pack. In addition, for the player of the simulator ETS 2, the possibility of external tuning has been added using a set of branded spare parts.

Additionally, there is an original trailer that can be downloaded here.

Dear user of the site, carrying out the transportation of goods on the virtual roads of Europe, for a variety of gameplay, do not forget to download and install new maps for any version of the simulator ETS 2!
truck tractor unit Iveco
Previous mod

The Brazilian Mascarello Roma R8 shuttle bus in ETS 2 has a realistic body rendering of a carefully recreated interior with advanced animation. There are two versions of the chassis with wheel...

Familiar to every lover of the ETS 2 simulator, the Iveco Stralis main tractor is presented in the author's version, and is registered in a separate slot. In technical terms, the new truck is...