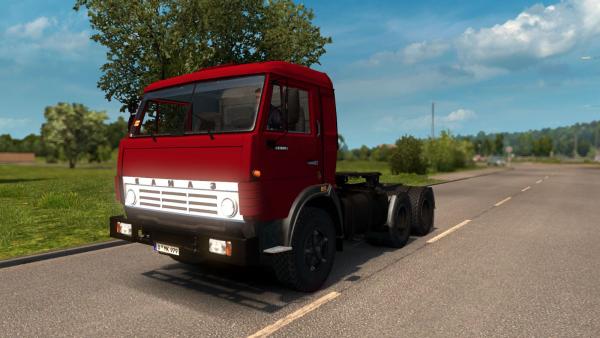 When developing the KamAZ 54115 car, engineers from Naberezhnye Chelny took the most popular Soviet powerful tractor KamAZ 5410. The idea was not bad, since by that time the legendary truck had established itself as highly passable, undemanding and easy to operate and maintain. The result of titanic works appeared in 2000, when the first machine came off the assembly line.

The KamAZ-54115 truck mod for Euro Truck Simulator 2 is quite often created by different authors, but in this embodiment, the steel representative of the Kama Automobile Plant is made in the best quality, among such modifications. A virtual trucker, when buying at a car dealership or upgrading, will have a difficult choice of equipment, as it is simply huge. The model range is presented in three versions, these are KAMAZ 5410, 54115 and 44108. On the frame with 6x4 or 6x6 wheel formulas, any of six types of cabs is installed, among which there is a variety of high and low, and among the power units you can choose seven engines of different power and six gearboxes. Among the assortment of tuning elements you can find spoilers, visors, grilles, bumpers, hoods and other decorative elements, which gives ample opportunities to give the truck an individual look.

But this is not all, the most important feature is that with the help of original elements any player in the ETS 2 simulator can recreate the legendary KamAZ from the series Truckers. The developers of the add-on have accurately displayed all the components of the exterior decoration used in the famous film.

Russian truck KamAZ-54115 from the television series: Truckers will be a wonderful gift for all fans of this film who want to feel themselves in the role of heroes of the film Sashka or Ivanovich....

The Russian truck KamAZ-5410 has won a worthy niche in the transportation of goods thanks to the design solutions of engineers at the Kama Automobile Plant. In the presented virtual version, the car...