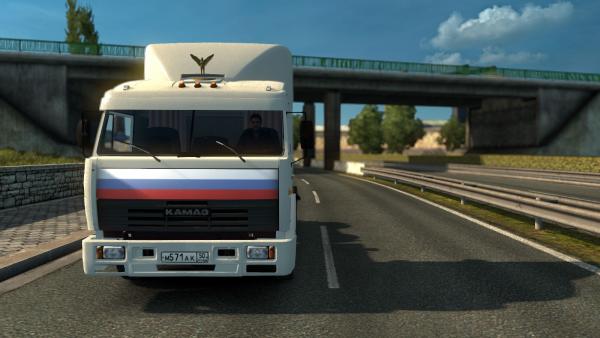 At the beginning of winter 2000, the first instance of the famous Russian KamAZ-54115 truck tractor rolled off the assembly line of the Kama Automobile Plant. A distinctive feature of the truck is an increased cab, increased payload, an improved chassis and other design solutions. Production continued until 2011, after which the truck was replaced by more modernized models. This car is familiar to many on a popular television series: Truckers.

The KamAZ-54115 truck tractor mod from Truckers for Euro Truck Simulator 2 appears for virtual drivers of the simulator in all its pristine beauty. Some authors have already created a similar truck in the KamAZ 5410, 44108 and 54115 car pack, but in this modification we have exactly that legendary truck. The set of elements includes the original figure of Nicky and the visor, and the front part of the cabin is decorated with the coloring of the Russian tricolor. The interior is standard, typical for these trucks. In addition to all the equipment contains a set of genuine wheels and a classic pack of sound effects. Fans of the series and the ETS 2 simulator will be happy to ride in a new car, introducing themselves as the heroes of the film, Sashka or Ivanovich.

The Russian truck KamAZ-5410 has won a worthy niche in the transportation of goods thanks to the design solutions of engineers at the Kama Automobile Plant. In the presented virtual version, the car...