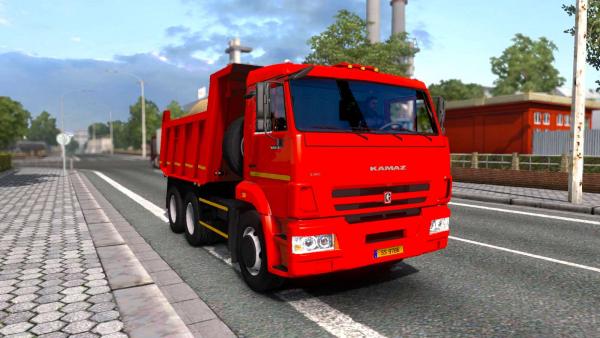 The modern Russian KamAZ-65115 truck is built on the basis of a chassis with a 6x4 wheel arrangement and has a load capacity of up to 15 tons. Since the release of the first models of KamAZ-5410 trucks, manufactured at the Kama Automobile Plant since 1976, engineers only slightly modernized the appearance of the cab, leaving it easily recognizable features, however, the internal technical filling stepped forward significantly, giving the car modern components and assemblies.

The mod of the KamAZ-65116 tractor and the KamAZ-65115 dump truck for Euro Truck Simulator 2 occupy only one slot in the car dealership, a suitable variation can be selected by selecting components. When creating the add-on, the authors took as a basis a high-quality three-dimensional model with carefully designed details. The virtual trucker will be pleasantly surprised by his own control physics, an original set of sound accompaniment and the presence of exhaust from the pipe. On the technical side, 6x4 chassis, several engines and four gearboxes are available. From tuning and a set of spare parts, you can pick up bumpers, headlights, radiator grilles and other items. The cabin interior repeats the original with reliable accuracy, it spells out the possibility of installing additional options in the form of a walkie-talkie, GPS navigator, on-board computer and other useful extras and decorations, including from DLC Cabin Accessories. On the roads of the ETS 2 simulator, the car looks fresh and bright, which greatly adorns the virtual world of endless European tracks.

Dear user of the site, traveling on the roads on the domestic truck, to feel like a real Russian trucker, we recommend you to download and install the mod Russian radio stations for any version of ETS 2 simulator!
KamAZ truck tractor dump truck
Previous modNext mod