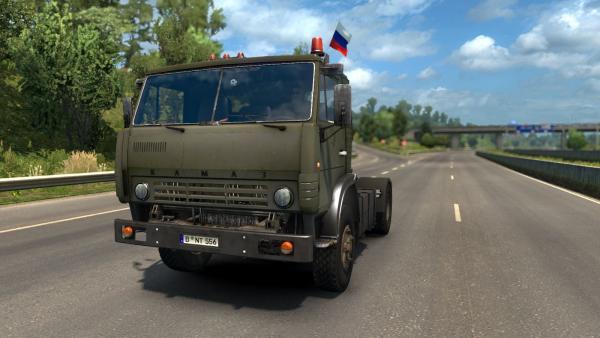 Heard the expression: Tanks are not afraid of dirt? Of course, everyone knows that these words are dedicated to the legendary trucks of the Kama Automobile Plant, whose history dates back to 1976. KamAZ-5410 became the first-born of this enterprise when, in the year of opening, the first representative of the glorious dynasty of trucks left the car factory. Engineers implemented the most advanced technology of those years, which allowed vehicles to take their rightful place among the cargo transportation. Production lasted about thirty years, later they were replaced by more advanced trucks, but not lost their appearance, recognizable appearance.

The KamAZ-5410 truck mod for Euro Truck Simulator 2 will ideally fit into additional locations of Russian maps of the Southern region, Russian map - RusMap and the like, because the add-on fully conveys the atmosphere of the Soviet automobile industry, familiar from childhood. The modification of the tractor is equipped with engines with its own soundtrack, a set of gearboxes, original wheels and a set of characteristic spare parts. KamAZ-5410 is ideal for fans of the Russian popular auto brand in the simulator ETS 2 and Russian locations.

The KamAZ-53212 three-axle flatbed truck provides the player with an alternative for transporting goods as part of a road train. In the configuration, you can find several types of frames: fuel...

Russian truck KamAZ-54115 from the television series: Truckers will be a wonderful gift for all fans of this film who want to feel themselves in the role of heroes of the film Sashka or Ivanovich....