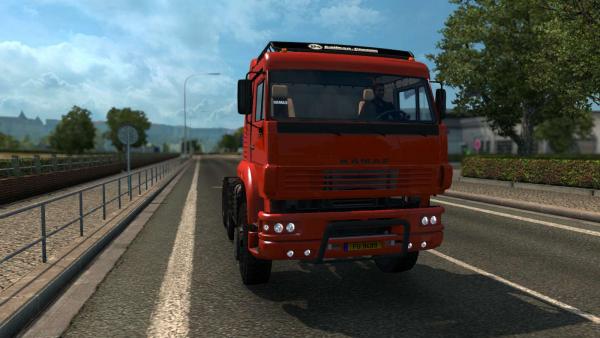 The rich range of Russian KamAZ trucks will replenish the collection of mods of the ETS 2 simulator with another glorious representative of trucks. This time, another copy of the Kama Automobile Plant is presented to our attention: KamAZ 6450, which began to be mass-produced since 2003. A heavy-duty all-terrain vehicle built on a chassis with an 8x8 wheel arrangement has found its wide application in the civilian and military fields of activity.

The mod of the Russian KamAZ 6450 truck for Euro Truck Simulator 2 has two types of chassis with 8x8 and 6x6 wheel formulas. The virtual trucker will have to choose the type of car, truck tractor or mining truck. In addition, there are a couple of options for off-road wheels, which will help to overcome the difficult routes of impassable roads on the map of Severe Russia. In addition, the player is offered three engines and several gearboxes and some characteristic tuning items. The authors implemented an original driver's cab with the ability to adjust the mirrors and driver position.