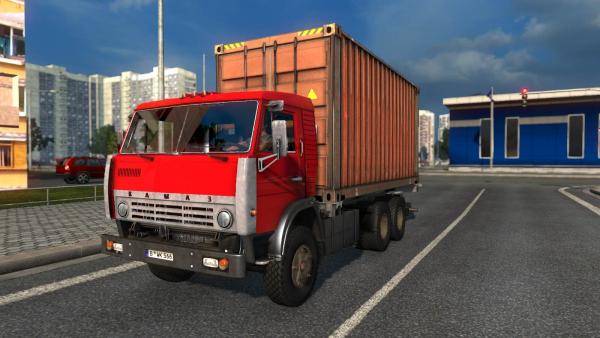 The Soviet KamAZ-5320 flatbed truck, designed on a three-axle chassis with a 6x4 wheel arrangement, was developed by domestic designers at the Likhachev automobile plant in the late sixties of the last century. However, the serial production of the truck was established much later, in 1976 at the Kama Automobile Plant. Production of the car was carried out for 25 years, until 2001. The truck was unpretentious, easy to maintain and able to work in bad roads, or in their complete absence.

The mod of the KamAZ-5320 domestic truck for Euro Truck Simulator 2 on the basis of a container ship includes four engines with approximate real characteristics and a set of characteristic sound effects, which is very useful when completing tasks in off-road conditions of a Severe Russia map, and three gearboxes for 10 and 12 steps. The authors realized the classic interior of the cabin with a fully working animation, as well as some genuine attributes for outdoor tuning. And finally, the addition for the ETS 2 simulator contains the original NEFAZ-8332 trailer, which is so necessary for transporting goods in tandem.