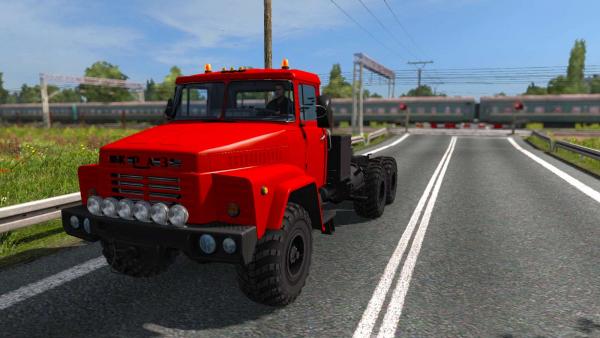 Designers of the Kremenchug Automobile Plant began developing the KrAZ-260 off-road truck in the mid-sixties of the last century, however, due to a lack of capacity of the enterprise, production of trucks had to be postponed. The first prototypes of the car saw the light of day only in 1979, and in 1981 their serial production was launched.

The mod of the KrAZ-260 truck for Euro Truck Simulator 2 is built on the chassis of a truck tractor, and if desired, in any of the garages of the ETS 2 simulator, a virtual trucker can install a tilt or open side truck, or a booth. Excellent off-road characteristics of the car will allow the player to carry out cargo transportation in off-road conditions of the Severe Russia map mode. The authors of the modification prescribed the characteristic characteristics of behavior, implemented the original cabin interior with mounting slots for a GPS navigator, walkie-talkie, on-board computer and other useful equipment. From external tuning, there is a set of lighting equipment on the roof.

Dear user of the site, traveling on the roads on the domestic truck, to feel like a real Russian trucker, we recommend you to download and install the mod Russian radio stations for any version of ETS 2 simulator!
KrAZ truck
Previous modNext mod

The game version of the Soviet MAZ-500 truck is a model for modular design, a wide selection of power units and chassis has been prepared for players, and a wide range of accessories for the...