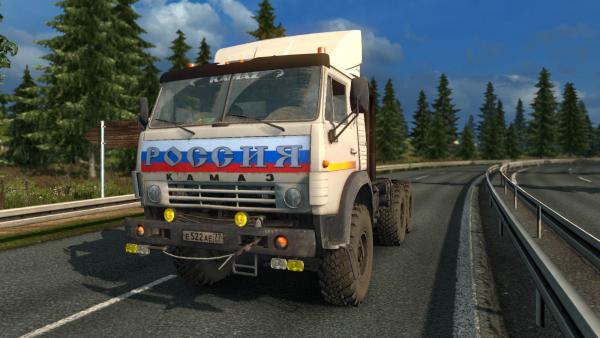 The Soviet off-road truck, KamAZ-4310, was produced at the Kama Automobile Plant since 1979. The car was built on an off-road chassis with a 6x6 wheel arrangement. The bulk of the cars were made for the needs of the army of the Soviet Union.

The mod of the KamAZ-4310 truck for Euro Truck Simulator 2, thanks to the naturalistic textures, looks very realistic, the implemented effect of dirt and dust perfectly harmonizes with the mods of Russian maps, such as Stern Russia and the like. The modification includes several types of cabs, among which you can find both standard and high, as well as with a berth for the driver. There are four chassis options with truck tractor frames and BDF type with 6x6 wheel arrangement. The engine range is presented in two variations, with a capacity of 400 and 700 horsepower. Of the three gearboxes, the player of the ETS 2 simulator can choose the appropriate gear for 10, 12 or 16 gears.

The authors of the add-on provide for external tuning, consisting of a large number of original spare parts, stickers, as well as a wide selection of off-road wheels. The virtual truck has an authentic interior with prescribed animation.

The KamAZ-53212 three-axle flatbed truck provides the player with an alternative for transporting goods as part of a road train. In the configuration, you can find several types of frames: fuel...