обновите на 1.40...
WE IN VK
SUBSCRIBE
Mods for ETS 2 simulator / All trucks / Russian trucks / Ural NEXT 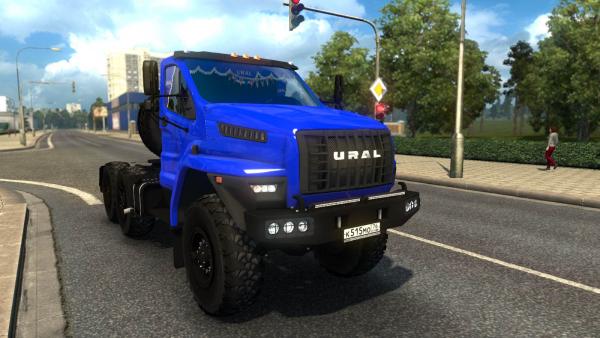 The Ural NEXT Russian off-road truck, developed at the Ural Automobile Plant in the city of Mias, was first introduced to the public in March 2014. The truck differs significantly from its predecessor Ural-4320 with a more modern cab design and ergonomic interior features. At the moment, both modifications of trucks are simultaneously produced at the car factory.

The Ural NEXT truck mod for Euro Truck Simulator 2 on a tractor chassis with a 6x6 wheel formula was created using a high-quality three-dimensional model. The authors implemented two engines with a capacity of 320 and 422 horsepower and four gearboxes. A significant set of auxiliary spare parts for tuning has been prepared for the virtual driver of the ETS 2 simulator, among which there are several sets of off-road wheels, additional lighting equipment, a registration sign, curtains and some other elements to give the individual appearance of a steel horse.

The Brazilian Mascarello Roma 370 shuttle bus, designed on the basis of the Volvo B420R, has every chance for passenger transport lovers to take their rightful place. The transport was made using the...