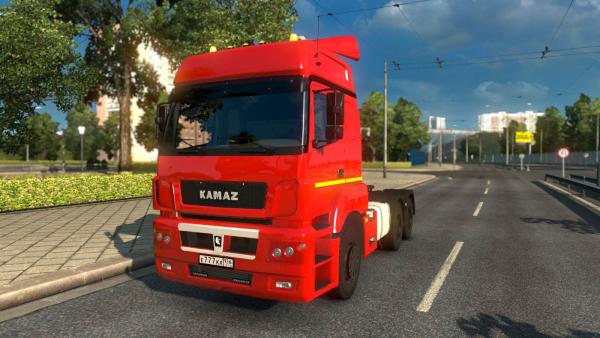 The universal mod of Russian trucks KamAZ-5490, 65206 and 6580 implements in Euro Truck Simulator 2 trucks of the new model range, significantly different from the classic truck of the 5320 series, produced by the Kama Automobile Plant, the mass production of which began in 2013. The models are of the highest quality, the player of the ETS 2 simulator is offered four types of cabs, seven chassis options with 4x2, 4x4, 6x4 and 6x6 wheel formulas, as well as the BDF version. Of the power units, six engines are available with power from 457 to 598 horsepower and ten gearboxes at 6, 8, 12 and 16 stages.

The authors added their own set of sounds, implemented characteristic physics and genuine external tuning. Of particular note is the original interior with full functionality, including animation, a proprietary on-board computer and the ability to adjust the steering wheel.