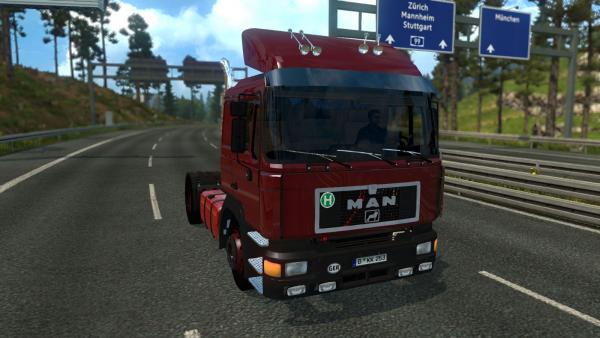 In 1986, the German company MAN began production of new large-capacity trucks of the MAN F90 series. When developing the truck, engineers along with increasing the power of the power units were guided to maximize the comfort and safety of the driver's workplace. As a result, the car received powerful six-cylinder engines and a spacious comfortable cabin. For lovers of the brand, you may like the MAN Lion's Regio bus, which can be used with the addition of passenger traffic.

The mod of the MAN F90 truck for Euro Truck Simulator 2 repeats its real prototype to the smallest detail, the developers recreated the chassis, the cabin with the original interior of the cabin, the dashboard and the sleeping compartment of a trucker partner. The virtual driver, if desired, can diversify the appearance by installing a spoiler, fog lights in the bumper, change the taillights or install signs from an additional set, and attach a GPS navigator to the windshield in a convenient place. Of the power units, the player of the ETS 2 simulator will be offered four engines and two gearboxes.

The second generation of the popular Man Lion’s Coach bus, model 2002, on a 4x2 chassis. In technical terms, the vehicle is equipped with an engine with a capacity of 420 horsepower and a six-speed...

The sports car Honda S2000, from Japanese manufacturers, in the back of a roadster can fundamentally change the specifics of the gameplay. After all, a powerful passenger car can be equipped with...