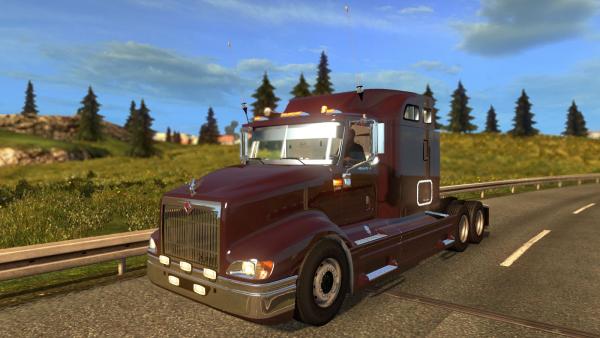 The American-made International 9400i tractor with a bonnet engine, has a spacious driver's cab with a comfortable work area for a partner, was produced mainly for the domestic market, that is, for the USA and Canada. Built on a chassis with a 6x4 wheel arrangement; in conjunction with an engine with a power of 380 to 600 horsepower, allow the transport of goods weighing more than forty tons.

The truck will be very interesting for lovers of American trucks. The mod of the International 9400i truck for Euro Truck Simulator 2 is constantly being improved by the author of the modification, with the release of each version it is supplemented and fixed. At the time of the release of the last option, a bug with a lack of shadow was fixed, the quality of the interior of the driver’s cabin was improved, which at the moment was carefully worked out along with the dashboard. In the kit there are four cab options with the ability to select a color palette, which if desired, you can create an individual look using the package of elements of external tuning. Virtual truckers ETS 2 will like the original sound set precisely prescribed for this type of truck.

Dear user of the site, carrying out the transportation of goods on the virtual roads of Europe, for a variety of gameplay, do not forget to download and install new maps for any version of the simulator ETS 2!
truck tractor International
Previous modNext mod

The BMC Pro 821 truck has a rather unusual cab design, built on a 4x2 chassis and featuring a 293 horsepower engine, the truck will fit perfectly into the gameplay. Two types of color finishes for...

The cabless truck International 9800, formerly manufactured in the USA, and assembled in St. Petersburg after the adoption of the scandalous law. The authors tried to recreate the game version of the...