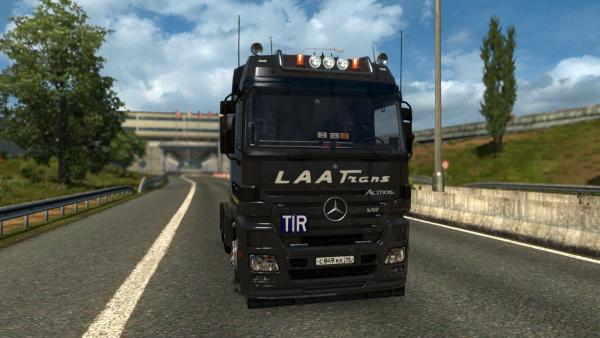 The Mercedes-Benz Actros MP2 tractor unit is a representative of the second generation of a series of this type of Mercedes tractor unit. The first truck left the factory in Germany in 2002, and in 2004 the car was awarded the prestigious Truck of the Year 2004 award at a car show in Hanover, Germany. The machine is characterized by cab comfort, ease of operation and unpretentiousness in maintenance, which has won worldwide recognition among truckers.

The mod of the truck Mercedes-Benz Actros MP2 for Euro Truck Simulator 2 in terms of quality is not inferior to the trucks included in the standard set of cars of the simulator, and even exceeds the range of elements for tuning, and will be a great addition for virtual drivers ETS 2 in the collection of Mercedes trucks , along with the Mercedes-Benz LPS 1632. When buying at a car dealership, you can choose two types of engine with a prescribed set of their own sound effects, six types of chassis and variations of the original wheels. As for the interior of the cabin, I would like to note the highest performance, the use of high-resolution textures and careful detailing will significantly increase the player’s interest in this modification.