What is password for extracting the file in winrar Can tell pls...
WE IN VK
SUBSCRIBE
Mods for ETS 2 simulator / All trucks / World trucks / Volvo F Series 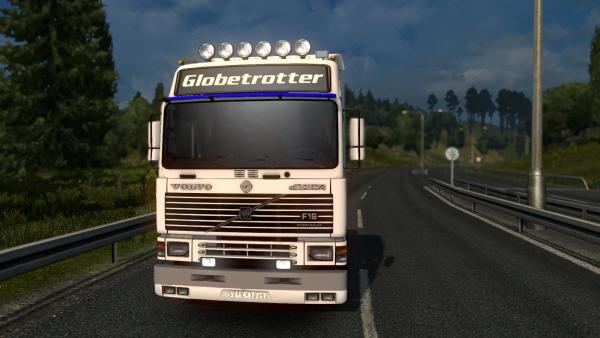 Outstripping their time in many technical characteristics, the Volvo F10 and F12 tractors saw the light back in 1977. The designers of the series used the most innovative solutions of the time when creating trucks. Particular attention was paid by the engineers to the convenience of the cabin and the safety of the driver’s workplace and sleeping bag. After 10 years, in 1987, the next model in the series, the Volvo F16, rolled off the assembly line, a distinguishing feature of which was a more powerful engine. Automobile production continued until 1993, and for all the time more than 200 thousand trucks were produced.

Mod truck Volvo F Series for Euro Truck Simulator 2 is made quite high quality and widely implemented. In terms of the number of additional bells and whistles, it stands a notch higher than the similar author's modification of the Volvo F10 and F12. When buying a tractor from a dealer, the player of the ETS 2 simulator will be offered as many as six types of cabs, four types of chassis, two engines with different power and two gearboxes at twelve speeds. To create your appearance, a set of radiator grills, gas tanks, bumpers, skirts and many other spare parts is provided. Of particular note is the interior of the cabin of the Volvo, it is available in two versions of the color palette, if necessary, it is possible to additionally install lighting in it, which will really please the virtual trucker. Pleasantly complements all this technical splendor, its own set of sounds, individually prescribed for each of the engines.

Additionally, you can install the pack of original classic skins, which can be download here.

Volvo F88 trucks from the Swedish company Volvo for ETS 2 are made in the highest quality. The virtual version of the truck is difficult to distinguish from a real prototype, there are several...

The Volvo 9700 Grand bus, presented in the simulator, is a series of models based on the Volvo TX platform. The set contains several engines, three and two-axle chassis, low and high landing frame...

Powerful Volvo F10 and F12 trucks recall glorious disco times. The author’s addition was made in excellent quality, first of all, a set of original vinyls for the cabin can be noted; to increase...