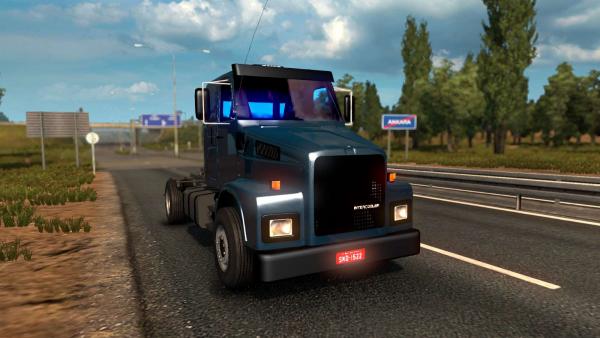 A classic representative of the European heavy-duty automobile transport, the Volvo N10 truck began to be produced by Volvo Truck in the mid-seventies of the last century. Automobile production was established on several types of chassis: 4x2, 6x2 and 6x4. Reinforced army versions were also produced on the 6x6 all-terrain chassis for the needs of the army of Belgium and Sweden. Unlike the Volvo F Series, which was produced in the same years, the engine of the car was located under the hood, which simplified its repair and maintenance. The service life of cars was very long, and until recently, copies of this vehicle could be found on European roads.

The mod of the Volvo N10 truck for Euro Truck Simulator 2 has only one type of cab and 4x2 wheelbase, but a wide choice of six engines from 210 to 405 horsepower and three sixteen speed gearboxes has been prepared for the virtual trucker. The authors registered their own physics of behavior and a set of original sound effects. From external tuning in any garage of the ETS 2 simulator, the player can use mud flaps, front bumpers, rear wings and some other upgrade elements. In addition, there is the possibility of tinting glass from 5 available options. Of particular note is the carefully crafted corporate interior and a detailed animated dashboard.

Dear user of the site, carrying out the transportation of goods on the virtual roads of Europe, for a variety of gameplay, do not forget to download and install new maps for any version of the simulator ETS 2!
Volvo truck
Previous modNext mod

A series of heavy trucks Volvo FM is presented in Euro Truck Simulator 2 on the tractor chassis, if desired, the player can choose the most suitable wheel formula for the intended tasks, as well as...