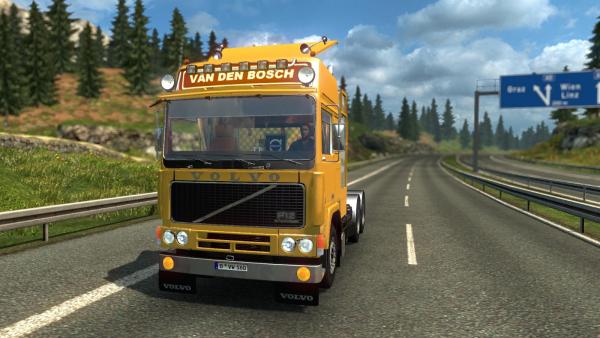 Volvo F-Series tractors date the start of production from 1977, the difference between the F10 and F12 markings is only in engine power, which reached up to 1000 horsepower with a turbocharger, so even oversized cargo could be transported with such power. The appearance of the cab will remind the virtual trucker of the glorious times of disco style. Volvo cars with minor changes and modifications were produced until 1993.

We have at our disposal a truck mod for Volvo F10 and F12 for Euro Truck Simulator 2. When buying a player, in addition to the standard truck option, a stronger one is available, based on an 8x4 wheel formula. A characteristic difference from the standard or original trucks of the ETS 2 simulator is the presence of characteristic, natural vinyls for the exterior of the cab, which will give maximum similarity to the original. The virtual trucker will plunge into ecstasy the authentic interior of the cabin, recreated in all its splendor, as well as the opportunity to decorate it with rare junk. And of course, you need to pay tribute to the authors for a set of their own sounds.