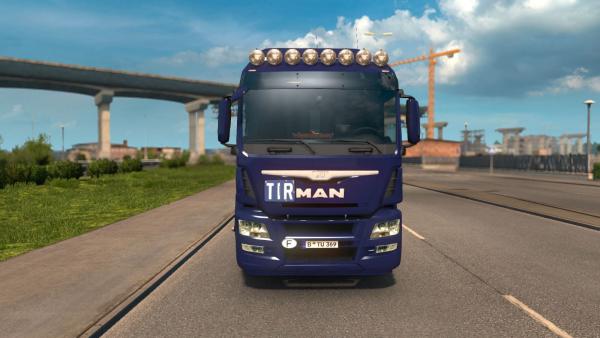 The universal tractor MAN TGS is designed primarily for transporting goods over short distances in the city, suburbs and trips to nearby settlements. Due to its small size and lightness, the truck was over-maneuverable, which had a positive effect when driving in a dense city stream. After modernization, the car received modern modified components, assemblies and a new engine of the ecological standard Euro 6, which made it possible to use it on long-distance routes, including foreign ones.

The mod of the MAN TGS Euro 6 truck in Euro Truck Simulator 2 is presented in a large selection of configurations, the quality of execution is comparable to MAN TGX. When buying a virtual trucker of the ETS 2 simulator, chassis options with 4x2, 6x2, 6x4 and 8x4-4 wheel formulas, cabs in the number of three versions, five engines from 320 to 480 horsepower will be offered. I would like to especially note the high-quality interior of the driver's cabin with realized original animation, as well as support for DLC Cabin Accessories. In addition, the authors of the MAN car added a very large number of elements for diverse tuning and an individual pack of sounds.

The MAN TGS-L commercial truck has one cab on a chassis with a 6x4 wheel arrangement; when purchasing or upgrading, it is possible to install a container or a food booth on the frame. A pretty good...

Realistic traffic signals increase the realism of what is happening in the game world. The operating time of a certain signal is registered according to the traffic. In addition, a yellow flashing...