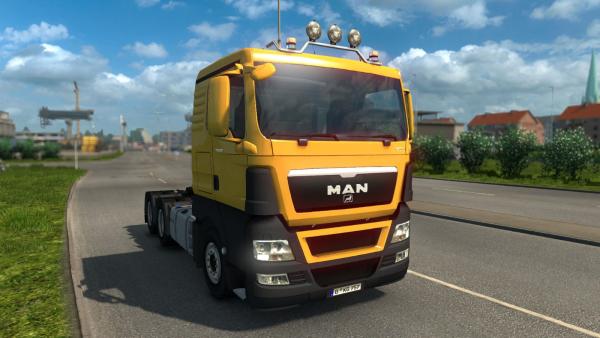 The MAN TGX series of truck tractors have embodied features such as reliability and economy. MAN trucks of this series were designed in such a way that it would not be difficult to re-equip the body or install additional equipment. A cab with a high level of comfort in the driver's seat allowed the trucker to travel long distances without fatigue, which can be seen while traveling on endless roads with a mods Brazilian map.

The MAN TGX truck mod for Euro Truck Simulator 2 is presented in a wide range, there are three types of cabs with an original interior and red instrument lighting, fourteen chassis types with a wheel formula from 4x2 to 8x4. The virtual driver of the ETS 2 simulator is offered engines with power from 235 to 500 horsepower. And to improve the appearance, there are more than fifty individual elements of tuning.

In addition to the MAN TGX tractor mod, in the addons folder there are DLC connection fixes, and an addition to installing your own inscription on the spoiler, when using these add-ons, they need to set a priority above the main mode.

Modification MAN TGX 2010 allows you to many times improve both the appearance of your truck, and the interior of the cab. There were about thirty additional options: in the driver’s cabin,...