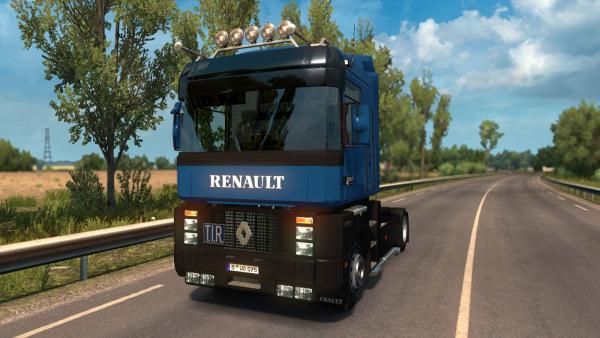 Another novelty in the fleet of the ETS 2 simulator is the French main tractor Renault AE Magnum, the production of which has been established since the nineties of the last century, and was produced with subsequent technical changes over the course of twenty-four years. Renault truck can still be met en masse on the roads of Europe.

The mod of the Renault AE Magnum truck in Euro Truck Simulator 2 is presented in the very first modification, a large cab, ergonomics of the driver's workplace and an impressive size windshield with a good overview, on which you can easily find the attachment point for the Garmin 50LMT GPS navigator, allowed the driver to make without fatigue long distance trips. When choosing a configuration, the virtual trucker will be offered configuration options with one cab, the only chassis option with a 2x4 wheel arrangement, three types of engines from 385 to 500 horsepower, typical wheels and a small but very necessary set for tuning. Pleasantly striking is the detailed study of the interior of the trucker’s cabin and the sleeping place of a partner. In addition, the mod complements the pack of sound effects and support for popular current DLC.

The new modification allows you to add to the truck interior, both standard and added, a very useful useful accessory, GPS navigator Garmin 50LMT. Settings allow you to place the device in any part...