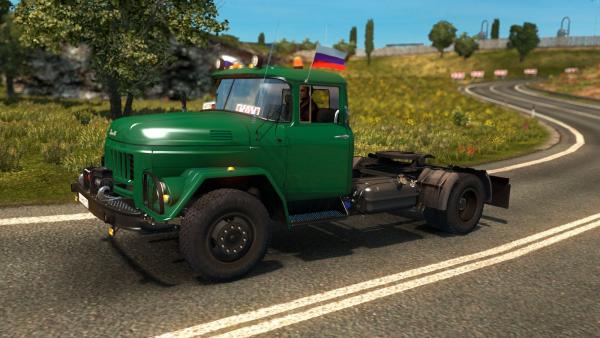 The Soviet ZIL-130 and ZIL-131 trucks that became legendary are probably familiar to every inhabitant of the former USSR from the cradle, and this is not unusual, because these trucks were produced at the I.A. Likhachev since 1964 of the last century, and for all the time it was released a total of more than three million copies. ZIL-130 was produced in many modifications for urban and agricultural purposes, ZIL-131 had an increased cross-country ability, therefore it was appreciated with dignity by the armed forces of the USSR, but for civilian purposes it had a lot of uses.

The mod that adds domestic ZIL-130 and ZIL-131 trucks to Euro Truck Simulator 2 has not yet been fully finalized, but in this form it also corresponds to a qualitative modification, a detailed model, an excellent quality interior, supports all the currently known DLCs in ETS 2 , as well as its own physics, behavior and unique sounds.

Well, the authors did not forget about tuning, there is the possibility of choosing a cab, chassis option, installing several types of boards on the frame, even loaded with watermelons, which will look great on the roads of the Southern region, replacing tires, installing a more suitable engine, and much more.

For later versions, the author added several original trailers to the archive with the mod.

Dear user of the site, traveling on the roads on the domestic truck, to feel like a real Russian trucker, we recommend you to download and install the mod Russian radio stations for any version of ETS 2 simulator!
ZIL truck
Previous modNext mod

The main truck FAW JH6 from auto manufacturers from the Middle Kingdom is still under development, but this is already a fully functional option. There is a carefully designed original interior, a...

The Soviet MAZ-504 and MAZ-515 trucks, which have become a legend, in their configuration have a choice of four original cabs, two types of interior, several types of engines, gearboxes and chassis....