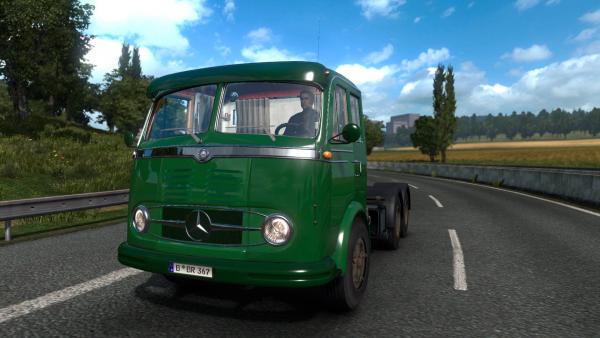 The rare Mercedes-Benz LP-331 truck was produced by the Brazilian branch of the Mercedes concern since the late fifties of the last century. Although the car has German roots, however, the cars of this model were not destined to surf the expanses of European roads, as the entire batch of cars was intended exclusively for the market of the South American continent, where they were widely used in the field of agriculture.

Mod truck Mercedes-Benz LP-331 for Euro Truck Simulator 2 is made in high quality, and will be a nice addition to the collection of fans of vintage cars, such as LS-1934 or LS-1519, on the tracks of the simulator ETS 2. The developers of the modification managed to accurately reproduce the body model and interior, original wheels with tires were added, a huge set of objects for tuning, allowing you to easily change the appearance of a small tractor, as well as implemented a pack of characteristic sound effects.

Dear user of the site, carrying out the transportation of goods on the virtual roads of Europe, for a variety of gameplay, do not forget to download and install new maps for any version of the simulator ETS 2!
truck Mercedes-Benz
Previous modNext mod