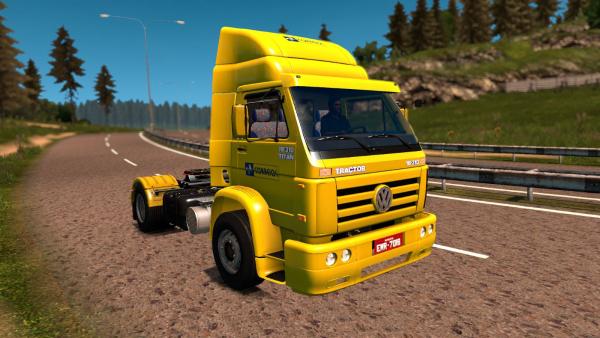 Although the Volkswagen Titan truck tractor was oriented towards the Brazilian market, it fits perfectly into the virtual world of the European highways of the ETS 2 simulator. The truck mod has a 300 horsepower engine, two gearboxes for 12 and 16 gears and one type of cab. In addition, the Volkswagen truck has its own interior, its own animation, a set of skins, new sounds and alternating body elements.

Since the car was oriented to the market of a South American country, it is therefore more suitable than ever for the Brazil map mod for Euro Truck Simulator 2. Driving a new tractor guarantees a lot of positive emotions.

Dear user of the site, carrying out the transportation of goods on the virtual roads of Europe, for a variety of gameplay, do not forget to download and install new maps for any version of the simulator ETS 2!
Volkswagen truck tractor
Previous modNext mod

Commercial vehicles Volkswagen Crafter have long and firmly entered the life of western carriers, body variations allow the van to be used in many transportation industries. Our Volkswagen can be...