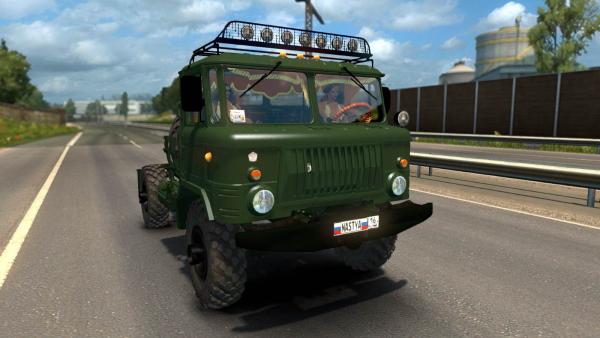 The GAZ-66 off-road truck was produced for the needs of the Soviet army and technical services, and was widely supplied to the countries of the Socialist camp. The truck, with a carrying capacity of 2 tons, had an all-wheel drive chassis and an engine located on a frame under the cab. Serial production of the car was carried out at the Gorky Automobile Plant from 1964 to 1999.

The mod of the GAZ-66 truck for Euro Truck Simulator 2 is still in the test version, however, among fans of Russian maps of the ETS 2 simulator, such as Stern Russia Baikal and the like, it will take its rightful place. The author has implemented the only cab on a saddle chassis with a 4x4 wheel arrangement, an engine with a capacity of 125 horsepower and a four-speed gearbox are installed from power units. Unfortunately, there are no painting options and additional spare parts, nevertheless, the developers worked quite well on the interior and prescribed animation.

Dear user of the site, traveling on the roads on the domestic truck, to feel like a real Russian trucker, we recommend you to download and install the mod Russian radio stations for any version of ETS 2 simulator!
GAZ truck
Previous modNext mod

The mod of the sports version of the fifth-generation passenger car BMW M5 F10 has pretty good optimization, the developers of the add-on have implemented their own characteristics and a set of...