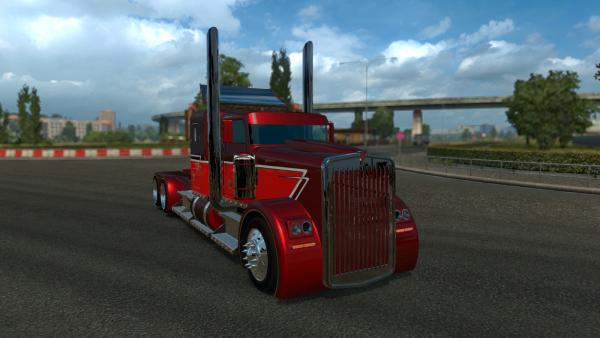 Initially, the powerful and beautiful truck Kenworth Hot Rod the Phantom was created by the authors for the American truck simulator ATS, then the modification developers moved it to ETS 2. The car has all the inherent features of cars manufactured in the USA. The colorful massive appearance of the bonnet reminds a highly tuned serial truck, which, in turn, will be liked by tuning lovers of standard and copyrighted representatives of vehicles.

The mod of the Kenworth Hot Rod the Phantom truck for Euro Truck Simulator 2 has an underestimated suspension, the add-on package contains several engines and gearboxes for every taste and budget, which can be installed in a car dealership when buying or upgrading in a garage. A beautiful dashboard in conjunction with the original interior, presented in seven color options, will nicely complement the technical picture. The new tractor has its own characteristic control physics, based on technical characteristics.

Kenworth T800 trucks shining with chrome have plowed the globe for many years. The tractor model adapted for ETS 2 was originally taken from the truckers 3 simulator, which indicates its high...