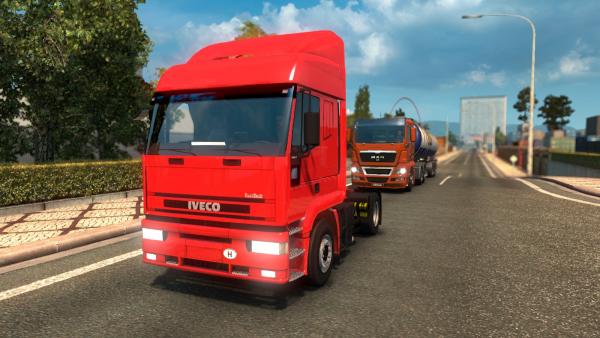 The Italian automobile manufacturer of heavy trucks Iveco in 1992 began the production of new, breakthrough, at that time, Iveco EuroTech trucks, and in 1993 EuroStar, which were produced for ten years. The concern’s engineers developed a new, modular design, which made it possible to assemble various modifications and special equipment on the basis of cars. The success of the new product was so great that even nowadays, these models of trucks can be found not only on Italian roads, but all over the world.

The Iveco EuroTech and EuroStar trucks for Euro Truck Simulator 2 are built on a 2x4 chassis. On the frame, painted in bright red color, you can install any cab out of three available. The virtual trucker has seven engines and two gearboxes. Upon purchase, it is possible to paint the body in any color, including metallic. From tuning, only a bumper change is available, however, for fans of BDF cargo transportation, it is possible to turn your tractor into a van by placing a board with an awning or a refrigerator on the frame.

Dear user of the site, carrying out the transportation of goods on the virtual roads of Europe, for a variety of gameplay, do not forget to download and install new maps for any version of the simulator ETS 2!
truck tractor Iveco
Previous modNext mod

The mod of powerful trucks Iveco Trakke includes almost the entire series of large-capacity trucks, which can be used as a tractor for carrying heavy cargo. A dozen heavy-duty engines paired with an...

The Volvo B12B regular bus fits perfectly into the vast expanses of the roads of virtual Europe and additional author's locations. When buying at a car dealership, it is possible to paint the body in...