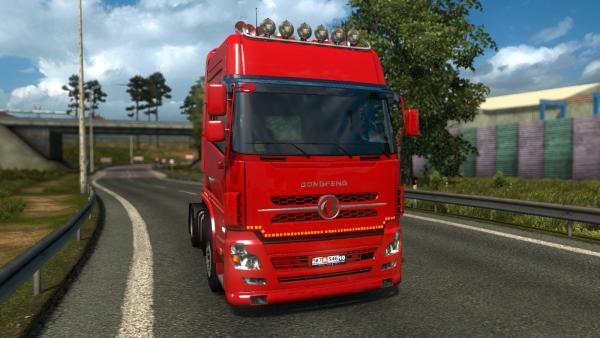 Unfortunately, the developers of the ETS 2 simulator bypassed the Chinese automobile manufacturers, adding only representatives of the European automotive industry to the game world. But, fortunately, this defect is fixable, thanks to the efforts of third-party authors of modifications. At the moment, several heavy trucks from China are plowing the vast expanses of virtual European roads, including the handsome FAW JH6 truck. In the new addition, the virtual trucker is given the opportunity to travel on another sample from China, developed by the largest automobile corporation Dongfeng Motor.

The Dongfeng DFL truck tractor mod for Euro Truck Simulator 2 has a fairly wide range of variations. Several types of wheel formulas are available for the chassis: 4x2, 6x2 and 6x4. Among the power units there are six engines from 375 to 1000 horsepower, which allows the truck to be used to transport goods of any mass. And also the driver will be able to choose for himself a suitable cab, high or low variation. The interior is designed to the smallest detail, has its own characteristic animation and support for DLC Cabin Accessories. Well, in the tuning set, even the most fastidious player will find everything that is needed to give originality to his car from a set of mirrors, skirts, spoilers, radiator grills, additional lighting equipment and other objects of changing the exterior.

Dear user of the site, carrying out the transportation of goods on the virtual roads of Europe, for a variety of gameplay, do not forget to download and install new maps for any version of the simulator ETS 2!
Dongfeng truck tractor
Previous modNext mod

The Chinese truck, successfully promoted on the world market, has now appeared on the virtual roads of Euro Truck Simulator 2. The mod of the truck, designed on a chassis with a 6x4 wheel formula,...

The powerful Chinese Dongfeng KX series modern trucks are starting to conquer European roads with their innovative technical developments and environmentally friendly solutions. In our version, we...