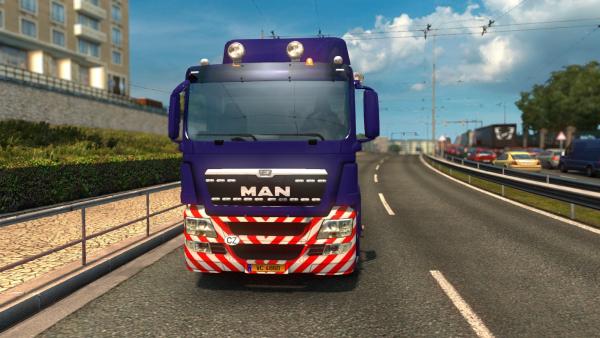 The MAN TGS range of trucks is designed primarily for transporting small consignments within the city and at medium and short range distances. The chassis base also allows the assembly of various special and construction equipment, for example, concrete mixers, truck cranes, snow blowers, dump trucks and similar modifications. In addition to them, truck tractors left the assembly line of the automobile plant, which were equipped with more powerful engines and a largely comfortable driver's compartment for transporting any semi-trailers and tanks with food and chemical liquids.

The MAN TGS truck tractor mod for Euro Truck Simulator 2 has in its kit three standard cab types provided by the manufacturer, about a dozen engines of various power, and several options for the chassis of the truck. The set of external tuning is pretty good, firstly, the virtual truckers of the ETS 2 simulator will be able to choose the appropriate front part of the cab for their needs, either conventional or reinforced for transporting heavy loads. In addition, stickers are available on the side windows of the doors, spoilers, mirrors and other exterior elements of the MAN car.

Easily recognizable truck Mercedes-Benz Antos 12 due to appearance and technical filling confidently stands above its competitors. The virtual version of the truck, presented in the simulator,...