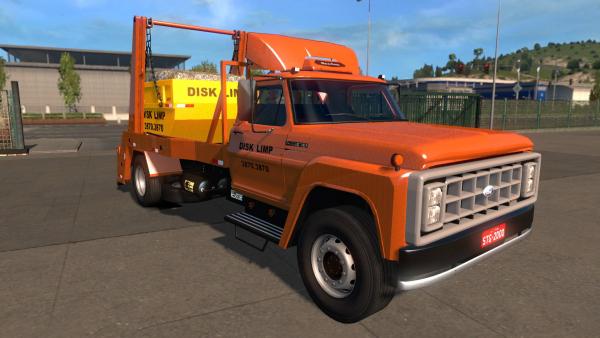 The Ford F-14000 light-duty truck has been produced since 1998 at Ford's Brazilian subsidiary. The vehicle is based on a two-axle chassis, and unlike the younger brother of the F-100, is designed to transport cargo just over two tons.

Mod truck Ford F-14000 for Euro Truck Simulator 2 includes two modifications of the car, truck and Transporter open containers. The authors of the Supplement were exactly reproduced the interior of the driver's cab with the possibility of replacing the seat upholstery, doors and floor coverings. On the technical side, there are four types of chassis with a 4x2 and 6x2 wheel formula, six gearboxes for 10, 12, 12+2 and 16 speeds, and three engines with a capacity of 134, 150 and 162 horsepower with its own set of sound.

Special attention to the players of the simulator ETS 2 need to pay to the rich opportunity in the performance of tuning, the range of which includes several types of cargo, radiator grilles, exhaust pipes, spoilers, air conditioners, additional lighting devices and some other nice things.

Dear user of the site, carrying out the transportation of goods on the virtual roads of Europe, for a variety of gameplay, do not forget to download and install new maps for any version of the simulator ETS 2!
Ford truck
Previous modNext mod

Heavy trucks Ford F-MAX has repeatedly conquered the virtual roads of Euro Truck Simulator 2. This time, the authors of the modifications presented another tractor mode. The developers implemented an...