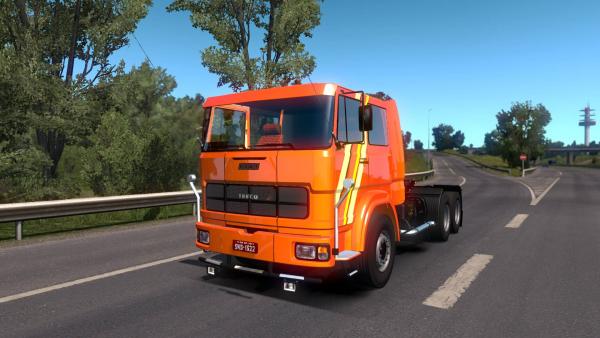 Production of a series of multi-purpose trucks Fiat 619 began in 1964, and lasted for decades, until 1991. During production, from the Assembly line of the Italian concern Fiat descended several hundred thousand copies of cars of various modifications, ranging from concrete mixers and other construction equipment, ending with powerful trucks.

Mod truck Fiat 619 N1 second generation for Euro Truck Simulator 2 is designed on the basis of the tractor, the authors recreated the classic cabin with a sleeping driver's seat, with the original interior and prescribed animation. The choice of the player simulator ETS 2 provided 11 chassis options with wheelbase 4x2 and 6x4. On technical parts of added 15 engines of from 140 until 445 horsepower with its terms of sound accompaniment and 6 transmissions on 6, 8 and 12 speeds. In addition, the possibility of external tuning and coloring the cabin on the corporate color scheme.

Dear user of the site, carrying out the transportation of goods on the virtual roads of Europe, for a variety of gameplay, do not forget to download and install new maps for any version of the simulator ETS 2!
Fiat truck tractor
Previous modNext mod

The Fiat FNM 210 truck will fit perfectly both on European highways and rural roads of additional copyright maps, especially in Brazil locations, since production from 1964 to 1972 was carried out in...