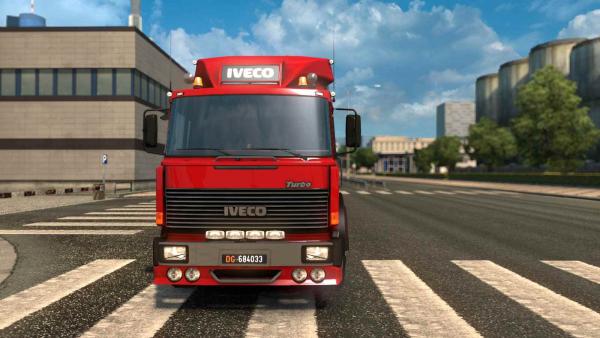 The fruit of the joint work of two leading automotive manufacturers Fiat and Iveco, the Iveco 190.38 Special truck came into the ETS 2 simulator from the distant eighties of the last century. The appearance of the truck only vaguely resembles the classic style of European cars and in its appearance is more similar to American trucks, which can be seen by looking closely at the vertically arranged exhaust pipes. The car was equipped with an engine capacity of 380 horsepower and allowed to carry goods weighing up to 18 tons.

The mod of the Fiat Iveco 190.38 Special tractor for Euro Truck Simulator 2, unfortunately, does not support cab coloring in a custom color and there is no tuning at all, however, a high-quality model and high-resolution texture allow the truck to stand on a par with other author representatives of automobile freight transport. Carefully worked out the smallest elements of the cab and the original animation of buttons, levers and devices in the cabin will deliver a lot of pleasant game minutes to the virtual trucker.

For the mod versions 2.0 and 2.1, the authors developed and added 5 new 18-speed gearboxes and 10 engines: Cat from 500 to 550 hp. and Cummins with power from 220 to 825 hp, with characteristics corresponding to the specification and realistic soundtrack, which are a separate pack download here.

Dear user of the site, carrying out the transportation of goods on the virtual roads of Europe, for a variety of gameplay, do not forget to download and install new maps for any version of the simulator ETS 2!
truck tractor Iveco Fiat
Previous modNext mod

The Fiat FNM 210 truck will fit perfectly both on European highways and rural roads of additional copyright maps, especially in Brazil locations, since production from 1964 to 1972 was carried out in...