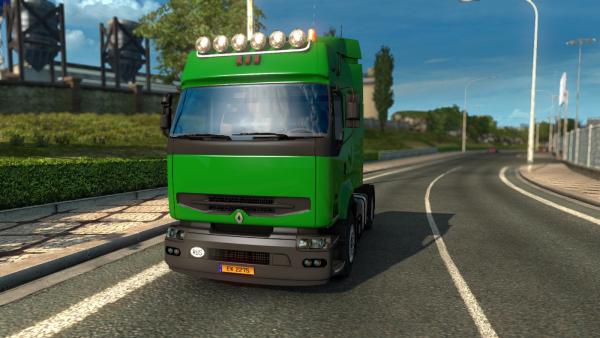 One of the representatives of the Renault Premium truck range, Renault Premium 420 DCI tractor unit. The appearance and geometric feature of the cab lines allows you to accurately recognize the breed of French heavy trucks in it. The truck was equipped with a sixteen-speed gearbox, an engine of 420 horsepower, which complies with Euro-5 environmental safety standards. The combined power of the car made it possible to carry out cargo transportation with trailers, the mass of which reaches 40 tons. Thus, transportation of heavy cargo was not a problem for Renault cargo.

The mod of the truck based on the Renault Premium 420 DCI tractor for Euro Truck Simulator 2 is rather poor in terms of tuning, from the set of which only flashing beacons, various stickers and a choice of cab color are available, however, a well-made model and a carefully recreated interior of the cabin more than pay for this drawback. Virtual truckers of the ETS 2 simulator will appreciate the prescribed animation and ease of driving.

It's time to breathe a little freshness and novelty into the standard Renault Premium tractor, this will help us a new mod from the popular author Schumi. Thanks to his efforts, the noticeably...

The brainchild of French automotive engineers, the fuel-efficient van Renualt L2H2 with a carrying capacity of up to 1.5 tons, is designed to deliver goods in small batches over long distances. It is...