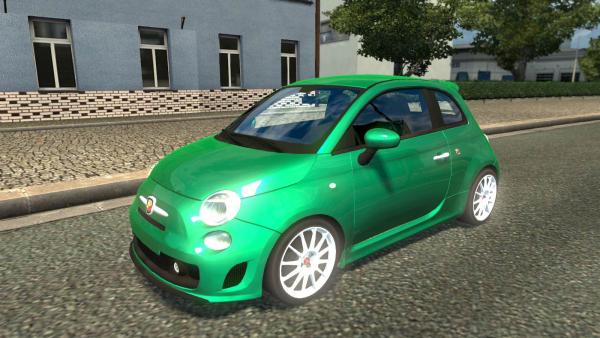 The sports version of the Fiat 500 production car in a three-door hatchback type, created by the designers of Abarth. The release of the car has been successfully carried out from 2008 to the present day. Fiat has many similarities with the classic Volkswagen Kafer in its appearance, but naturally, it is more modern and technological.

The Fiat 500 Abarth passenger car mod for Euro Truck Simulator 2 was transferred to the vast virtual roads of Europe straight from the popular Forza Motorsport 3 racing car simulator, which indicates the high quality of the three-dimensional model. The authors of the modification placed a 180 horsepower engine with genuine characteristics under the hood, supplemented by a five-speed gearbox. Fans of the ETS 2 will also like the original interior with a fully implemented dashboard animation.

Dear site user, for cargo transportation by passenger car, do not forget to download and install the mod Passenger trailer for all ETS 2 simulator versions!
cars Fiat
Previous modNext mod