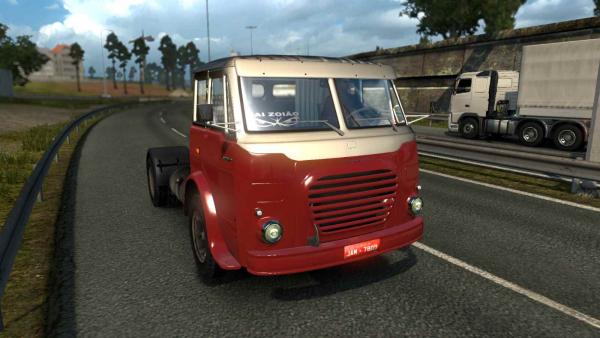 The small Fiat FNM 210 truck, the production of which began in Italy from 1958 and continued until 1964, then production was moved to Brazil, where the last representative of the car rolled off the assembly line in 1972. Cars were distinguished by great reliability, unpretentiousness and ease of maintenance. The maximum mass of transported goods allowed the transport of trailers weighing up to 45 tons. The universal suspension design made it possible to overcome difficult dirt roads, and even off-road, without any problems, which can be seen by traveling on the map of Fazenda Brazil, where it is fully possible to enjoy the technical capabilities of the truck.

The Fiat FNM 210 truck mod for Euro Truck Simulator 2 is built on a chassis with two options for a 4x2 and 6x4 wheelbase, there are three engines of different power with individual characteristics. If desired, a virtual trucker can choose the color scheme for existing skins to his taste. The addition of the ETS 2 simulator has a set for external exterior changes, among which you can find replaceable bumpers, mirrors, visors, lighting equipment and other tuning items. For the shoes of a Fiat truck, several original rims are prescribed. The driver's compartment is genuine, and supports DLC Acessories.

Dear user of the site, carrying out the transportation of goods on the virtual roads of Europe, for a variety of gameplay, do not forget to download and install new maps for any version of the simulator ETS 2!
Fiat tractor truck
Previous modNext mod

The Fiat Tipo car is implemented in the game as a universal modification, when you visit a car dealership, a player in one slot can find a car in two body types at once: a hatchback and a sedan, and...