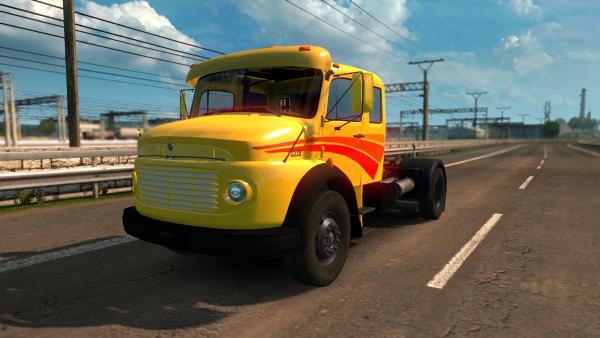 A rare Mercedes-Benz 1519 truck sends its fiery greetings from the last century to the ETS 2 simulator. Designed in the early seventies, the car was intended for the market of South American countries. Despite its advanced age, vehicles are still operated for the transport of small goods, for example, on the roads of the Brazilian countryside, so it will become an adornment of the colorful roadside landscapes of the map of Brazil.

The Mercedes-Benz LS-1519 and LS-1525 truck mod for Euro Truck Simulator 2 based on the same universal chassis with a 4x2 wheel arrangement, when choosing the appropriate series, two cabs will be available for a virtual trucker, the same number of gearboxes and engines. Despite the modest appearance, the authors laid huge potential in the form of a rich assortment of spare parts and tuning elements, among the entire abundance the driver will pick up bumpers, wheels with tires, visors, taillights, mudguards and much more. The interior of the driver’s cabin, typical of that time, was recreated by the developers with reliable accuracy, the Mercedes gauges are fully animated, and the panel, seats, lounger and windshield have the opportunity to place various original items. And of course, physics of behavior, the authors of it was almost completely repeated from the original.