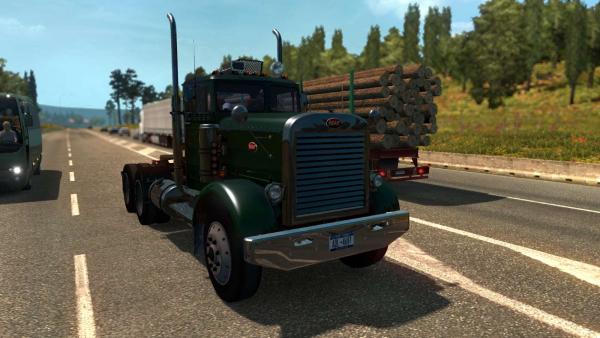 An obvious representative of the classic design of the American automobile industry of the middle of the last century. A brutal appearance with a powerful engine located under the hood can easily plug many representatives of modern tractors into the belt. Along with the Freightliner FLB truck, Peterbilt 351 also attracted Hollywood filmmakers and starred in the lead role of the popular film Duel, directed by Stephen Spielberg.

The mod of the Peterbilt 351 truck for Euro Truck Simulator 2 is built on the chassis of a truck tractor. The authors recreated the frame and the cabin with the smallest decoration elements with maximum accuracy. In the workshop for the virtual trucker of the ETS 2 simulator, the authors of the modification prepared two cabs, the usual one, and with a sleeping bag for long-haul flights, each of which has its own, own interior of the cabin. From the technical part, the add-on kit includes several varieties of engines and gearboxes. The truck mod supports the popular DLC Cabin Accessories, has a set of original sounds and characteristic physics of behavior.

Dear user of the site, carrying out the transportation of goods on the virtual roads of Europe, for a variety of gameplay, do not forget to download and install new maps for any version of the simulator ETS 2!
truck Peterbilt
Previous modNext mod