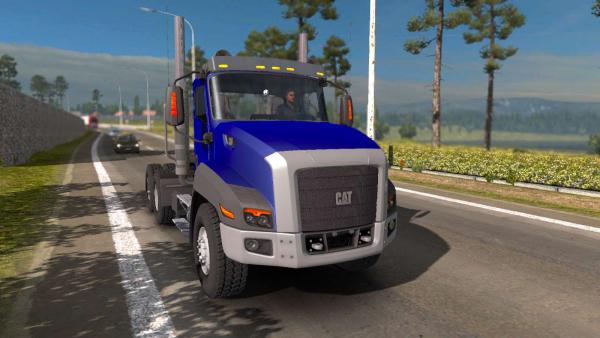 At the 2011 Nevada Auto Show, Caterpillar introduced the new truck model, the Cat CT660. The truck is built on the International PayStar chassis, equipped with powerful engines from 330 to 550 horsepower, equipped with an automatic six-speed gearbox. The cabin is made of aluminum alloy, and, like the bulk of American trucks, has a hood layout of the power unit.

The Cat CT660 truck mod for Euro Truck Simulator 2 has a set of seven engines of different power, and the same number of gearboxes. When buying at a car dealership, you can choose the most suitable version of a three-axle chassis with a 6x4 and 6x6 wheel arrangement. The authors realized the original interior of the cabin using high-quality textures. The car is equipped with characteristic disks and tires, as well as a virtual trucker simulator ETS 2 will pleasantly please a set of genuine sounds and its own control physics.

Dear user of the site, carrying out the transportation of goods on the virtual roads of Europe, for a variety of gameplay, do not forget to download and install new maps for any version of the simulator ETS 2!
truck tractor Cat
Previous modNext mod

The truck DAF CF 85 in the ETS 2 simulator retained all the characteristic features of the original, the player, except for ordinary chassis with a hitch, can pick up the BDF base for work in tandem....

The American truck International 9400i was produced mainly for the domestic market, that is, for the United States and Canada. In a virtual version, the truck has four types of cabs with the ability...