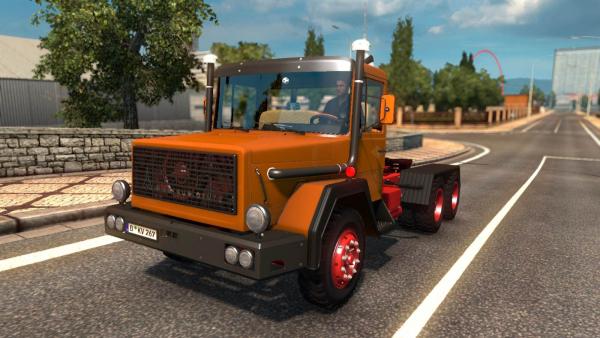 The classic representative of the trucks of the seventies of the last century, the car Magirus-Deutz 290, produced in Germany until 1976. Trucks have been widely used not only in Western Europe, but also on large construction sites of the USSR, including during the construction of the BAM, since power and unpretentiousness made it possible to operate them in severe Russian off-road conditions.

The Magirus-Deutz 290 truck mod for Euro Truck Simulator 2 is built on the chassis of a 6x4 truck, the ETS 2 simulator player can access a pair of 182 and 280 horsepower engines with their own sound effects pack, four gearboxes for twelve and sixteen stages and original set of wheels. Of particular note is the extensive range of parts for external tuning, among which you can find mirrors, fenders, exhaust pipes, radiator grills and many other decor accessories. The authors paid special attention to the reconstruction of the authentic interior of the cabin with full animation, as a result, it fully corresponds to the prototype with photographic accuracy.

For the truck to work correctly on the simulator versions 1.31 - 1.38, the fix must have priority over the files of the main mode!

Dear user of the site, carrying out the transportation of goods on the virtual roads of Europe, for a variety of gameplay, do not forget to download and install new maps for any version of the simulator ETS 2!
Magirus-Deutz truck tractor
Previous modNext mod

Many fans of the game more than once encountered difficulties when completing tasks in off-road conditions on Russian copyright maps. With the new powerful MAZ Prototype tractor, all problems will be...

Designed for the Eastern European market, the Romanian Diesel Romanian tractor unit is designed under license from the German concern MAN. Depending on your wishes, you can choose a chassis, install...