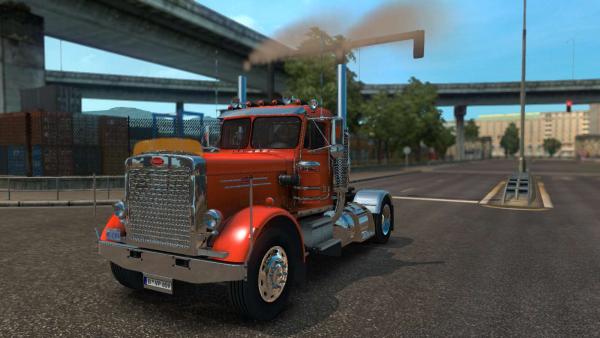 The famous American tractor Peterbilt 359 from beginning to end is filled with the atmosphere of the old school of automotive USA. The release of trucks was established in the second half of 1967 and lasted for 20 years, and in 1987 it was replaced by more advanced trucks of the 379 series.

The mod of the Peterbilt 359 truck for Euro Truck Simulator 2 is recreated in great detail, the sparkling chrome appearance and the original interior with the prescribed animation speaks about the high quality of the model. The virtual trucker will be pleasantly surprised by the large number of outdoor tuning items, including bumpers, grilles, mirrors, lighting fixtures, exhaust pipes with a realized exhaust effect and much more.

When buying a car, the player has access to three types of chassis with 4x2, 6x4 and 6x4 Long wheel formulas, as well as twelve branded engines with capacities from 218 to 550 horsepower with their soundtracks, and six gearboxes for 10, 12 and 18 gears. The new brutal car will fit perfectly into the game world of the ETS 2 simulator, and will bring a lot of positive emotions behind the wheel.