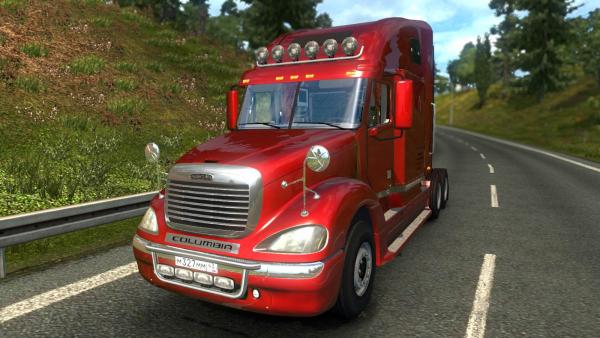 The appearance of the American heavy trunk truck Freightliner Columbia can easily be called a brutal monster. The abundance of chrome, the enormous dimensions and the aerodynamic design easily give it the typical breed of trucks manufactured in the North American country. The machine is characterized by high reliability and increased comfort for drivers, which allows for the transportation of bulky cargo over long distances.

The Freightliner Columbia truck mod for Euro Truck Simulator 2 has in its arsenal five cabs with a high-quality interior and a prescribed cabin animation mounted on a chassis with a 6x4 wheel arrangement, as many as twenty-nine engines ranging from 370 to 665 horsepower with their own set of sound effects, and such the same number of boxes at 10, 12 and 18 gears. The richest assortment of tuning items can not be described, among them a virtual trucker can find moldings, side skirts, bumpers, headlights, spoilers and much more that will allow a player in any garage of the ETS 2 simulator to turn his truck into an exclusive handsome man.

Dear user of the site, carrying out the transportation of goods on the virtual roads of Europe, for a variety of gameplay, do not forget to download and install new maps for any version of the simulator ETS 2!
Freightliner truck
Previous modNext mod