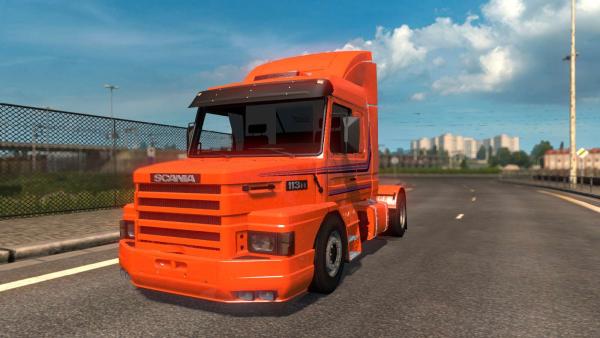 In the first half of the eighties of the last century, the Brazilian branch of Scania launched the production of new Scania 113 H trucks. The car, like the bulk of American trucks, had an engine compartment under the hood, where engines from 320 to 360 horsepower were installed, and was produced she is in the most sought after modifications. Simplicity and low cost of maintenance made it possible to operate them in completely different directions, from the delivery of goods to work on construction sites.

The mod of the Scania 113 H truck for Euro Truck Simulator 2 is quite simple, includes one version of the cab on a chassis with a 4x2 wheel arrangement. Power units are represented by three engines with a capacity of 320, 360 and 380 horsepower, and two gearboxes. Detailing the interior of the cabin is quite high quality, the authors even managed to implement a DVD player in the front panel, and register the animation. Well, for each player of the ETS 2 simulator, the tuning kit is no less important, in this modification it is present in sufficient quantities. Each virtual trucker will choose suitable mudguards, radiator grilles, spoiler wings and some other spare parts for his steel horse.