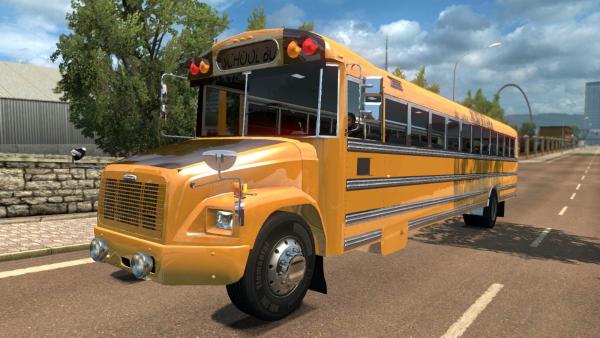 The passenger vehicle Freightliner FS-65 is known to the majority of fans of the ETS 2 simulator in American youth films as a school bus. The production of this modification was carried out from 1997 to 2006. This vehicle, like almost all Freightliner trucks, has an engine compartment.

The mod of the Freightliner FS-65 school bus for Euro Truck Simulator 2 is not without drawbacks, for example, it has no shadow and wipers are not correctly located, however, a high-quality three-dimensional model that completely repeats the real prototype significantly smoothes out these shortcomings. The authors recreated the original interior of the cabin with the prescribed animation of devices, toggle switches and levers, there are slots for placing additional accessories. In addition, there are spare parts for external tuning and a wide range of power units, consisting of powerful engines and gearboxes.

Dear user of the site, for passenger transportation by bus, do not forget to download and install Passenger mod for all ETS 2 simulator versions!
bus Freightliner
Previous modNext mod

The virtual version of the Freightliner FLD series of heavy vehicles in the modification of the main tractor impresses the fan of Euro Truck Simulator 2 with the variety of comprehensive tuning...