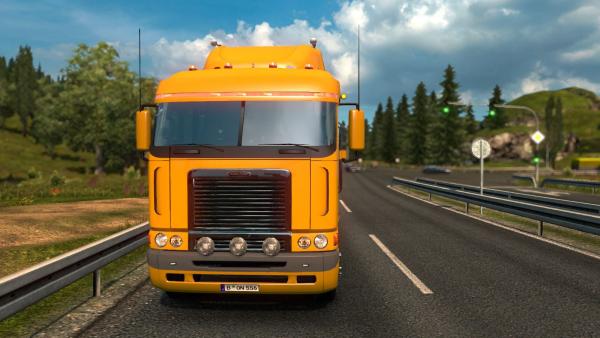 A typical representative of the American truck, the Freightliner Argosy tractor began production in 1998. A distinctive feature of this representative is the location of the engine under the cab. The developers moved away from the classic engine compartment placement of the power unit, which increased the maneuverability of the car both on the roads and at the loading platforms, which can be seen with the mod of the new unloading zones. Engineers have implemented maximum comfort and safety for drivers.

The mod of the Freightliner Argosy truck for Euro Truck Simulator 2 is constantly being improved and supplemented, the authors registered a new physics of behavior and added a set of their own soundtrack. The truck in the ETS 2 simulator has two chassis with a 6x4 and 6x6 wheel formula, but the rest of the choice is much wider, consists of several engines, gearboxes and four types of cabs. In addition, it is possible to note the high quality of the interior of the driver’s cabin and, to the smallest detail, a well-designed rest compartment of a virtual trucker. And of course, the tuning kit is very happy, with it you can significantly decorate the appearance of the car, because the range is pretty impressive, it includes exhaust pipes, mirrors, mud flaps and much more.

The virtual version of the Freightliner FLD series of heavy vehicles in the modification of the main tractor impresses the fan of Euro Truck Simulator 2 with the variety of comprehensive tuning...