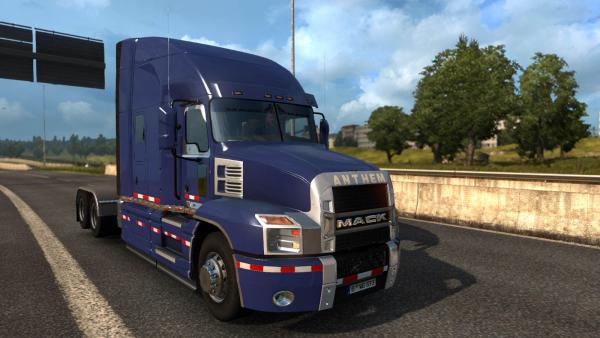 A new product from Mack Trucks, the Mack Anthem truck, which replaced the heavy Mack Titan, has a traditional engine compartment for trucks operating in the United States. The new flagship has a modern aerodynamic design of the cabin and more advanced technical stuffing.

The mod of the Mack Anthem tractor for Euro Truck Simulator 2 is pretty well visualized, which affected the increased demands on the system, the authors implemented four cabs, seven chassis types, several powerful engines with power from 325 to 1005 horsepower and a series of gearboxes for 10, 12, 13 , 14 and 18 speeds with original characteristics. Particularly noteworthy is the truly reconstructed interior with prescribed animation, a set of branded accessories for external tuning and characteristic skins. For the latest versions of the ETS 2 simulator, developers have added new features, such as animated cables and other functions.

Dear user of the site, carrying out the transportation of goods on the virtual roads of Europe, for a variety of gameplay, do not forget to download and install new maps for any version of the simulator ETS 2!
Mack tractor truck
Previous modNext mod