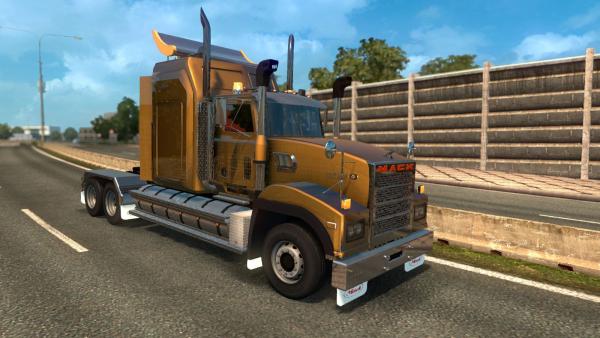 The powerful heavy truck Mack Titan first saw the light, driving out of the gates of US automotive giant Mack Trucks in 1995. Initially, the truck was intended exclusively for export to Australia, but the North American countries' demand for heavy duty trucks required a reorientation of production for the domestic market. The engineers of the car precisely determined the name: Titan, because not all cars of this class possess the ability to transport goods weighing up to 200 tons. A brutal truck is capable of transporting various loads on platforms, including heavy and oversized ones.

The mod of the Mack Titan tractor for Euro Truck Simulator 2 is pretty well done, the trucker can choose the color of the truck, there are original wheels, a small set of spare parts and tuning elements. The interior of the driver’s cabin is implemented in decent quality, more reminiscent of a small-sized apartment. The characteristic dashboard with wood trim will not leave indifferent even the most sophisticated drivers of the ETS 2 simulator.