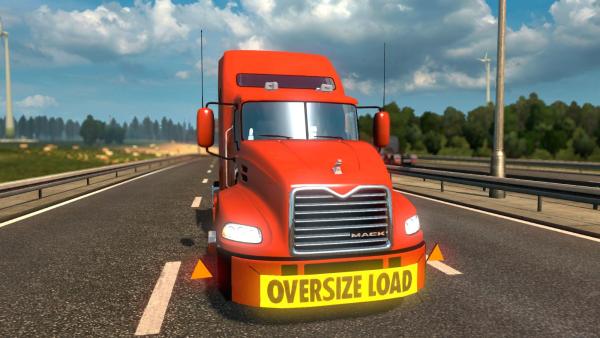 The powerful Mack Pinnacle heavy tractor is manufactured in the USA, Mack Trucks not only for the domestic market, but also exports to the countries of North, Central and South America, where their production is also well established, but they have a distinctive marking. For example, in Peru, they are produced under the brand name Vision Elite, and are used in many regions, so they can be found on the mountain roads of the map of Peru.

The authors of the mod truck Mack Pinnacle in Euro Truck Simulator 2 was transferred from the game American Truck Simulator; A huge assortment of tuning elements and technical elements has been prepared for the ETS 2 simulator. The virtual trucker is offered a chassis with the following wheel formulas: 4x2, 6x4 and 8x4, a large selection of gearboxes from 6 to 18 speeds, of which there are more than twenty in the set. Separately, I want to focus on engines of well-known brands, as many as 50 of them are included.

Four types of cab with six interior options complete the entire technical luxury, with the option of selecting a more suitable steering wheel and dashboard. And of course tuning, the developer of the modification did not forget about it, and put everything that was possible into the implementation, these were mirrors, spoilers, fenders, bumpers, exhaust pipes, and much more. Traveling on a Mac truck will bring a lot of new things to the ETS 2 simulator and bring a lot of pleasure to even the most fastidious driver.