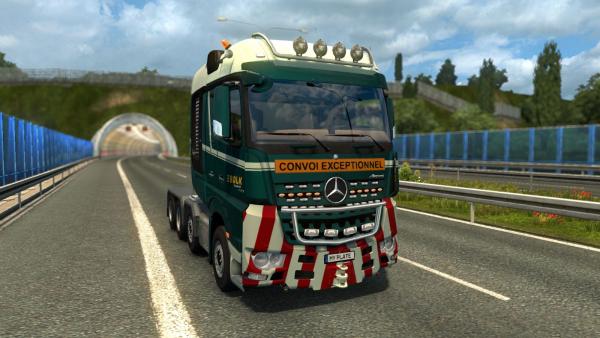 For a long time, the engineers of the Mercedes concern had the task of developing powerful trucks capable of carrying heavy loads, and in the late nineties of the last century, the designers of the Daimler AG group developed two heavy tractors Actros SLT and Arocs SLT. They were based on Actros and Arocs trucks, which are mass-produced, which, after modernization, received air suspension, an 8x8 chassis, a powerful engine and an automatic transmission. Such a powerful machine has become capable of transporting goods weighing up to 250 tons.

The heavy truck mod Mercedes-Benz Actros SLT and Arocs SLT for Euro Truck Simulator 2 is made in excellent quality, and is primarily suitable for transportation of oversized cargo. In the showroom, the trucker will have two options for the cab with a detailed interior design that exactly repeats the existing analogue. Original skins and a tuning kit will allow you to designate a Mercedes marking for special transport. The driver on such a steel hero will worthily occupy the title of King of Roads of the ETS 2 simulator.

A new interesting mod of the Mercedes-Benz Arocs Agrar truck, designed specifically for agricultural needs with a special Kipper trailer with a front rotary axle, will delight the virtual drivers of...