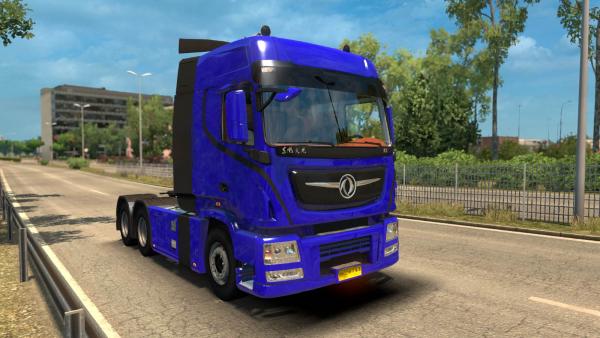 A special series of Chinese Dongfeng KX trucks has been developed for use in difficult road conditions. During the development of automobiles, the designers of Dongfeng Trucks used the most advanced innovative technical solutions, which allowed them to be aimed at the world market.

The mod of the Dongfeng KX series of tractors for Euro Truck Simulator 2, unfortunately, does not have the same variety of powertrains as the Dongfeng DFL, because the authors implemented the only typical chassis with a 6x4 wheel formula, an engine with a capacity of 540 horsepower and a twelve-speed gearbox. However, a high-quality three-dimensional model of a lorry that blurs the line between the virtual world and reality will more than cover this small drawback. In addition, the developers of the modification completely recreated the signature characteristic interior of the driver's cab, fully implemented the animation of instruments, wipers, switches and added the ability to adjust the steering wheel. Well, your own set of sound effects will be a nice addition for ETS 2 players, fans of trucks from the Middle Kingdom.

Dear user of the site, carrying out the transportation of goods on the virtual roads of Europe, for a variety of gameplay, do not forget to download and install new maps for any version of the simulator ETS 2!
Dongfeng truck tractor
Previous modNext mod

The Chinese truck, successfully promoted on the world market, has now appeared on the virtual roads of Euro Truck Simulator 2. The mod of the truck, designed on a chassis with a 6x4 wheel formula,...

Chinese trucks continue their triumphant conquest of the game world. This time, the line reached the FAW J6 series of trucks. The mod included two cab options and several types of chassis. There is...

Heavy-duty representatives of China's largest automobile manufacturer Dongfeng Motor are rarely seen on the roads of both our country and Europe. However, in the simulator, thanks to the developers...