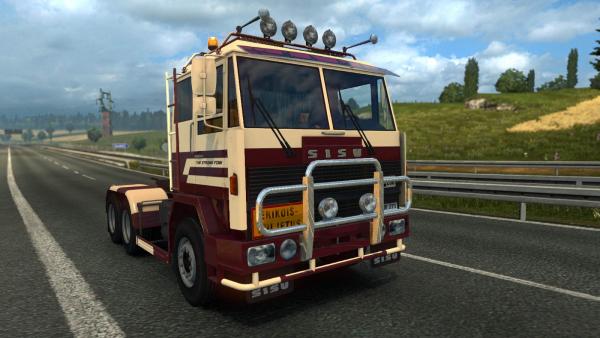 The classic Sisu M-Series Finnish heavy truck range from Suomen Autoteollisuus (SAT) began in the second half of the sixties of the last century. During production, four models were mastered on a chassis with a 4x2, 6x2, 6x4 and 8x2 wheel arrangement. The release of cars was carried out in the period from 1969 to 1984.

The mod of the Sisu M-Series tractors for Euro Truck Simulator 2 is of high quality, like its "younger brother" Sisu R500, C500 and C600. The authors of the modification managed to implement such models as M-161, M-162 and M-163. When choosing a complete set, the player of the ETS 2 simulator has the opportunity to select a cab, both with a driver’s berth and without it, a chassis with 4x2, 6x2 and 6x4 wheel formulas, 265, 293, 315, 374 and 405 engines with three horsepower gearboxes at 13 and 14 speeds. A virtual trucker will be pleasantly surprised by their own set of sound effects, exactly recreated interiors of two types of saloon with full animation and individual physics of behavior and control of a truck.

Dear user of the site, carrying out the transportation of goods on the virtual roads of Europe, for a variety of gameplay, do not forget to download and install new maps for any version of the simulator ETS 2!
Sisu truck tractor
Previous modNext mod

The Chenglong Balong 507 tractor unit, built on a chassis with a 6x4 wheel arrangement, has the only cab option with a driver's berth. The developers realized the original interior with precisely...

The virtual versions of the Finnish truck series Sisu R500, C500 and C600 are equipped with several chassis options with characteristic wheel formulas, standard engines and gearboxes. The range of...