What is password for extracting the file in winrar Can tell pls...
WE IN VK
SUBSCRIBE
Mods for ETS 2 simulator / All trucks / World trucks / Ford F-MAX 500 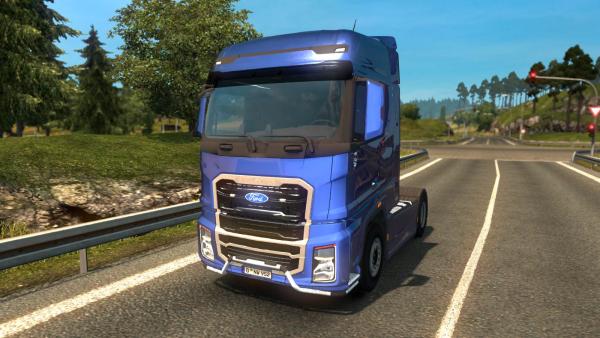 The Ford F-MAX line of modern trucks was first shown in 2018 at the reputable international automobile salon IAA, where it received a prestigious award among commercial vehicles. The truck was jointly developed by Koc Holding and the Ford Motor Company, and, like Cargo 1832, is produced by the Turkish branch of Ford.

The mod of the Ford F-MAX 500 tractor for Euro Truck Simulator 2 has a chassis with a 4x2 wheel arrangement, presented in two versions. A standard cabin is installed on the frame; from power units there is an engine with a capacity of 500 horsepower and a gearbox for twelve gears. When buying a truck, the player of the ETS 2 simulator can choose a light or dark kind of interior upholstery. The authors realized the original interior and added the possibility of external tuning.

For version 2.0 of the mod there is a pack of accessories for external and internal tuning, among which are: new sun visors, mirrors (12 styles in total), rear wings, side skirts, mud flaps and other exterior elements, which can be downloaded here.

In the latest version of the mod, the Ford F-MAX truck can be purchased at DAF dealerships.